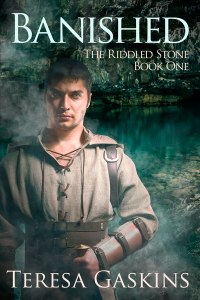 As the music ended, Chris pulled Arnold back against the wall of the ballroom, hoping to avoid attention while the various young ladies sought their next partners. Voices rattled in the background. The feast had been finished hours ago, and now it was eleven and he was sick of dancing, and his feet agreed.

Anthony had brought the news that Crown Prince Tyler was coming. Four days later the prince had arrived, and now, of course, there had to be a party. All sorts of people had accompanied the prince, or arrived slightly before him. Chris wasn’t even sure how they all found out the prince was coming.

Arnold, as a knight, had been invited to the banquet, and though he had planned to leave town yesterday, he decided to “stick around for the food,” as he’d phrased it. But Chris wished the two girls were with them as well. He had danced most of the dances, but the ladies were snobbish or boring. He wished Terrin was there to roll her eyes at their fancies, and Nora to at first stare in awe, but then giggle with him about their faults.

A slim lady, more elegant than most, stepped forward. She held her chin high, showing off her pearl choker, and causing her pearl circlet to catch the light.

“Honorable Christopher,” she said in a high voice, with a bit of an accent, “you probably don’t remember me. We met when we were young. I was a bit older, so I remember, but you were just five. I’m Lady Joline.”

He half bowed, then said, “Lady Joline, I think I remember you a bit. Your parents were the ambassadors for Diamond Isles, right? This is my cousin, Sir Arnold, recently titled a knight.”

Lady Joline beamed. “Sir Arnold. An honor to meet you. Yes, my late parents were the ambassadors, and I have recently taken my mother’s place. Duke Grith has been very kind to accommodate me when I’m in North Raec.

“But enough about me. Arnold, come dance with me. And can I claim the dance after from you, Honorable Christopher?”

“I do not have any previous engagements,” he said.

Then Arnold stepped forward to take Joline’s arm. Chris bowed his head to them as they departed. Arnold glanced back, and Chris played the game, grinning at him and winking.

But the grin vanished quickly as he wondered how mad his father would be if he simply left. He looked towards the high table. Prince Tyler was chatting merrily with his father, who no doubt was slipping in compliments to his children whenever he could. Chris shook the thought from his mind — with the crown prince here, there would be no hope for escape.

Anthony himself was nowhere to be seen, but Chris suspected he was among the dancers, winning favor with the most important of the young ladies, or at least the richest.

By the time the bell tolled midnight, he had been made to dance with almost every lady in the room. His feet ached, and he happily retired to a corner as his father stood to make a speech, and then the prince after him.

Midway through the prince’s speech, there was the sound of footsteps from the hall. Everyone’s eyes shifted to the door, and the prince paused. Then the door swung open, and an old man appeared, accompanied by five younger-looking guards.

Immediately the man, whom Chris recognized as the Shard’s caretaker, knelt and bowed his head. The guards quickly did the same. The prince bid them rise, and the man, Darwin, explained.

“Hail, Crown Prince Tyler Coric. Hail, Earl Diard Fredrico. Hail, honorable knights and ladies. I’m sorry that I must ruin your fun, but I have found the Shard stolen, and proof that one of the Earl Diard’s family is involved.” He held up a brooch, marked with the seal of the earl’s house.

Chris bit his lip. Making a quick decision, he stepped forward before anyone else could. “I have been missing my brooch since the early afternoon. I noticed it was gone when we were walking back to the house from meeting the prince. I didn’t go out after that.”

Then Anthony stepped forward and said, “I hate to accuse my own brother, but I have not seen him for at least the last hour. I speak only out of concern, but it is hard for him to confirm his story.”

And slowly, as if Anthony’s words had convinced them, the people said they couldn’t remember it either. Suddenly Chris felt dizzy, even slightly sick. He looked for his sister, but Trill was shrinking into the crowd, unable to say anything above the growing murmur of angry voices.

His father’s face looked red and angry as he spoke above the noise. “And how do you suppose an eighteen-year-old boy, even the son of an earl, stole a Shard?”

“With the Crown Prince at the manor, we thought it best to move most of the guards here. Only these five were at the Shard, and I found them fast asleep.”

“What will you have us do, Crown Prince?” asked the earl. His hands gripped the table, his knuckles white.

Tyler rose. “Search Christopher and his rooms for further evidence. If none is found, we will let him go. If proof of his involvement is found, then I will send a message to my father.”

Chris stiffened, but then relaxed. They couldn’t prove anything against him, because he hadn’t done it. And the only people who could have planted something in his room were his family, the servants, or maybe a few of the guests.

And why would any of them do that?