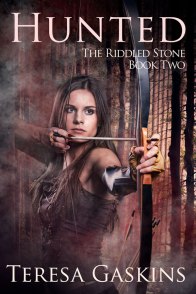 Click here to read from Chapter One. Or go back to the very beginning in Banished: The Riddled Stone Book One.

“So, lad, I reckon yer headed to the capital to volunteer for th’ army?”

The villager’s deep voice carried up the hall from the inn’s common room. Terrin paused by the doorway, listening.

“And how do you reckon that?”

Terrin recognized Arnold’s voice and almost laughed when she realized who the farmer was talking to. Despite his boyish looks, Arnold was already a knight.

Though his knighthood would surely be revoked, if they were ever caught. The terms of Chris’s banishment would apply to anyone who dared to help him. And they had been traveling with Chris, until the idiot decided to run off on his own in a misguided attempt to keep them safe.

Now they had to hunt him down, and the rain that had been falling on and off — mostly on — for the past two days didn’t help.

The villager spoke again. “Bah. If yer not headed there now, ya will be soon enough. Soon as the war starts, and we all know that won’t be long. Personally I think the king’s doing a botched job of it. We all knew another war would be coming any time now, but did he start preparing? No! He waits to th’ last minute.”

“My poor Nessa,” moaned another voice. “She won’t be able t’ handle it. All alone like. She’s been doing alright since her mother died, but I don’t think she could take it if I was called away now.”

“Stop yer groaning, Clark. Nessa’s stronger ’an a pair of ox. She’s as likely t’ be called as ya.”

Arnold broke in. “Tell me, what exactly have you heard about this upcoming war?”

The second farmer, Clark, answered. “Some caravan got burnt up real good. Heard the Crown Prince found it ’imself. They say there’s proof a South Raecan lot were the ones attacked it.”

The first farmer gave a snort. “We coulda attacked years ago, got ahead of ’em. Now we’ve let them have the first move! It’ll take months t’ amass a frightful force t’ oppose ’em. As I say, the king shoulda been preparing!”

“Wait,” Arnold said. “Are you saying the king shouldn’t have had hope for a lasting peace? Building up an army would have brought war for sure.”

“Aye. Not till the king’s got ’em under his belt,” added Clark. “And th’ longer he takes, th’ more we simple farmers suffer for it.”

“You forget,” said Arnold, “the nobles always have knights in training. And the king has allies he can call upon, if there is a war.”

“Sure, the knights’ll come. But th’ allies won’t. Only ones close ’nough are the Yorcs.” A couple farmers gave low laughs at this. “And th’ Isles. No help from either o’ them.”

Terrin’s sharp ears picked up someone muttering, “Th’ Yorcs need t’ be taught a lesson much as th’ South’ners,” under his breath.

Her mouth pulled back into a deep frown.

“Well, as ya can see, we don’ have no allies close ’nough to help. ’At leaves th’ lords and their knights.”

“And,” finished Clark, “th’ lords and knights can’t fight no war on their own. So they’ll be sendin’ fer us farmer folk. You’ll see.”

Terrin almost smiled as she imagined Arnold’s flustered face — being lectured about the ways of war when he’d been taught by real knights. But she was too annoyed by the comment about the Yorcs.

At least Nora was still in their room and had not heard.

Chris pulled his cloak tighter and shivered, poking his pitiful attempt at a fire with his foot.

The heavy drizzle plastered his hair flat. He tried to tuck one loose strand behind his ear, but it stuck to his forehead. The black mess was growing long enough to get in his eyes, and he feared the day he would have to comb it.

Beyond the fire, he could see Thomas curled in his blanket. The older man had fallen asleep quicker than Chris would have thought possible in this constant rain.

He himself could not sleep, but it was more than just the rain. How was he supposed to make plans when he had no idea where they were headed? His last dream had shown him five people riding into the early morning sun. So he and Thomas were traveling east — though the sun had yet to show its face.

He had told Thomas of the dream, but he hadn’t mentioned the extra three people. No reason to worry him. Still, Arnold, Terrin, and Nora had been constantly on Chris’s mind since then. He was sure he’d done the right thing when he left them. His presence had brought them nothing but danger.

Of course, he was also endangering Thomas, but the older man knew what he was doing. The others had followed him on blind faith. They’d expected him to head to Diamond Isles and live a peaceful life in exile. Instead he had dragged them into a quest to follow magic riddles that sounded like nonsense.

A quest to what?

The cave where King Miles found the Riddled Stone and its five Shards, long ages ago? If he got that far.

And if he did, what good would that do him?

The harpies had shown him the first riddle — the same one that launched King Miles on his quest during the Great Raecan War — carved in ancient runes deep in their secret cave. The message had warned that “until the hidden are retrieved, you cannot be free.”

Was he being foolish to hope that he could find the missing Shard, which he was accused of stealing, the reason he had been banished? But whoever had taken the Shard had disappeared without leaving a clue — not one that didn’t point to Chris, anyway.

How could an old cave, even a mysterious, magical cave, have any proof of his innocence?

No, now wasn’t the time to worry about that. He would deal with that when he got there. If that was where the magic was leading him.

For now, he just had to worry about what to do next. He let his mind wander over the maps he’d studied in school. The challenge would be not to get lost in the forest. Probably their best bet was to swing north and find the cliff that marked the southern edge of the Dark Forest. That would make it easier to keep from getting turned around, and they should be able to pass quickly and unnoticed.

Yes, this was best. He would deal with things as he got to them. Thinking too far into the future or past would only dishearten him.

At this point, he couldn’t give up, or he’d have nothing.