So you know that book I wrote three years ago? Well, about two months ago, I published the sequel, and, like the first-class procrastinator I am, put off telling you guys about it until I forgot. So… uhm… SHINY:

Magic is a Treacherous Guide

As a child, Terrin of Xell was almost devoured by a spirit from the Dark Forest. She knows better than to trust magic. But when her friend Chris was accused of a magical crime he didn’t commit, she couldn’t let him face banishment alone. So she and her friends get caught up in a quest to recover an ancient relic, with only magic to guide them. And everything is going wrong.

First, Chris went missing, his trail washed away by spring rains. Now Arnold’s injured, and the countryside buzzes with rumors of war. In the forest, the wraiths—tiger-like, reptilian creatures—grow dangerously aggressive. Then Terrin starts seeing visions of a madwoman in the shadows.

Are Terrin and her friends being hunted? Or has the magic decided to turn against them?

It’s even got a review:

Now I’m not saying it was worth the three-year wait, but, in my own opinion, Hunted improved on Banished in almost every way. And here’s a  review to back that theory up:

“… a captivating fantasy story with a well-thought-out plot … people who like medieval-style fantasies with wraiths, spirits, and even an attacking swamp tree will enjoy the story. I certainly did, and the excitement, adventure, and suspense will easily keep the reader’s attention …”

Reviews help encourage readers to take a chance on a new, unknown author like me, so getting one makes me pretty happy. And it’s great to hear that at least someone enjoyed it.

In the future, you can be one of the first to hear about my new books and sales or other promotions. Subscribe to my Tabletop Academy Press Updates fantasy fiction newsletter. And in return, I’ll send you a copy of my report “Where Do Writers Get Ideas?”

Read How the Story Begins 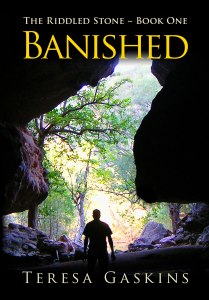 Who Stole the Magic Shard? Crown Prince Tyler raised his hands. The crowd fell silent at once. “I have made my decision,” the prince announced. “From this moment forward:

“Christopher Fredrico is banished from the kingdom of North Raec. If he is found within our territory, his life will be forfeit.”

All Chris wanted was to be a peaceful scholar who could spend a lot of time with his friends. Now, falsely accused of stealing a magical artifact, he is forced to leave the only home he knows. But as he and his friends travel towards the coast, they find a riddle that may save a kingdom—or cost them their lives.

Get a free copy of my 50-page booklet of stories and writing tips for young authors, and be one of the first to hear about new books, revisions, and sales or other promotions.
Click Here to Learn More